Is IPv6 Faster Than IPv4? 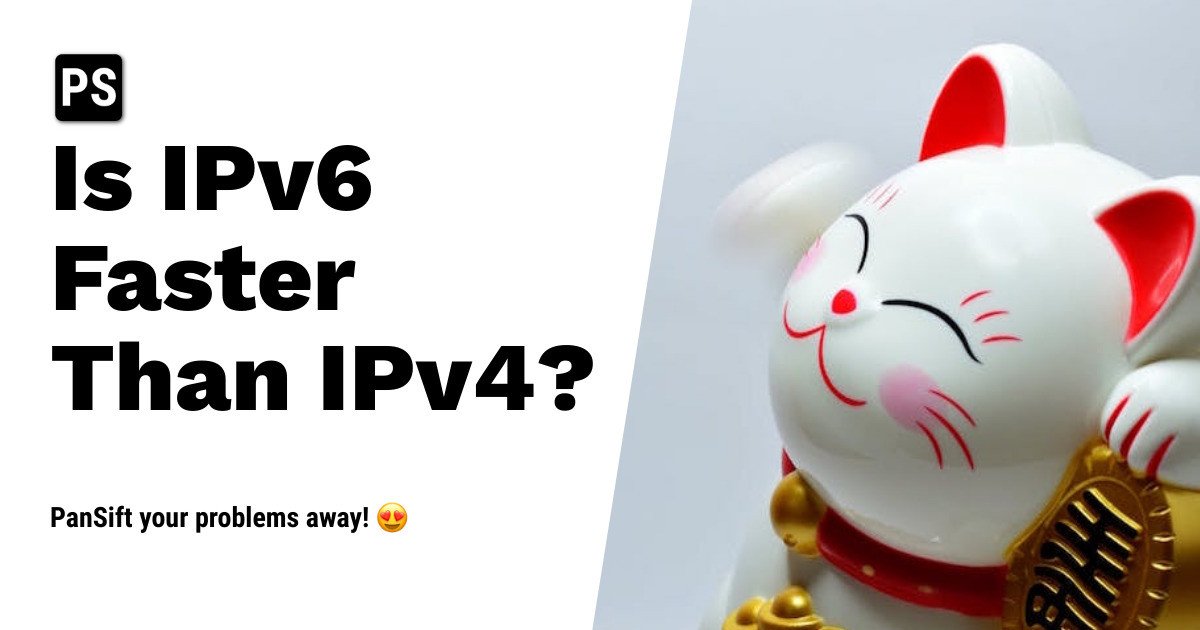 To answer this question we decided to look at anonymized data we had collected from a range of monitoring agents over a 30 day period. For simplicity, the data used only focused on the client’s RTT (Round Trip Time) to their default gateway. This sub-path does not cover a full round trip to Internet based assets, it’s just the first leg of a journey (often over Wi-Fi), which admittedly can suffer extreme variability. There are many nuances that may affect our initial results, including but not limited to, size of data set, differences in device, OS (Operating System) level, the medium, protocol, CoS type, etc. It is, however, precisely because of the complexity involved that we decided to look at one simple and comparable metric!

We began by using our Wi-Fi assurance and remote troubleshooting tool called PanSift (see a live demo). We started with 2.4 million network related gateway data points. These measurements were taken every 30 seconds from 16 randomly selected macOS agents (using our maximum data retention period of 30 days). Subsequently, the data points used were from agents when fully online with dualstack connectivity (i.e. can reach Internet based lighthouses), rather than just being locally_connected yet we only used the data from the client to the default gateway. Using Internet connected hosts makes any comparison fairer such that there’s the potential for ongoing traffic traversing connections and the gateways we’re measuring to. Additionally, it should be noted that PanSift does not normalize data and retains full fidelity metrics. This allows for fine grained analysis and even retrospective troubleshooting. After filtering data for agents with concurrent IPv4 and IPv6 Internet reachability, we were then left with 342,980 valid gateway related data points.

The PanSift agent sends 3 ICMP echo_requests every 30 seconds using both IPv4 (ping) and IPv6 (ping6) while also explicitly setting the COS (Class of Service) to Best Effort . The options used with ping and ping6 (just to be explicit) are:

We then used Influx’s flux scripting language to do some simple comparisons on whether IPv4 or IPv6 was faster.

Note: To simplify, we also rounded the (float) values to (integer) whole numbers so we could quickly and more fairly compare “ties” between IPv4 and IPv6.

* We require a wider data set as most agent data was from Wi-Fi / WLAN connected hosts. The types of wired hardware recorded were primarily, "USB LAN" and "USB-C LAN" types, some of which may have been synching at lower than gigabit (1000 Mbps) speeds. As such, we need to also start to grab the media output, however both IPv4 and IPv6 are traversing the same media!

What is IPv6 connectivity anyway?

We’ve previously done a primer on IPv6 connectivity and troubleshooting here, so let’s take a brief look at some of the fundamental differences between IPv4 and IPv6 in relation to our data.

The ICMPv6 format is described in RFC4443 whereas ICMP is described in RFC792, yet apart from the difference in Extension Headers (which are not relevant here), one wonders about why IPv6 might be faster than IPv4 (perhaps related to the gateway stack and utilization?).

We now need to expand the above analysis to see if:

Work From Anywhere requires reliable connectivity for all voice, video, and data. Inevitable issues cause individuals and teams to lose time and productivity while missing out on opportunities. Whether at home, in a coworking space, or in the office (and irrespective of network owner), forward thinking teams embrace smarter tools to save time and money. See how PanSift provides instant troubleshooting irrespective of location.

End user experience monitoring for your team or tribe!