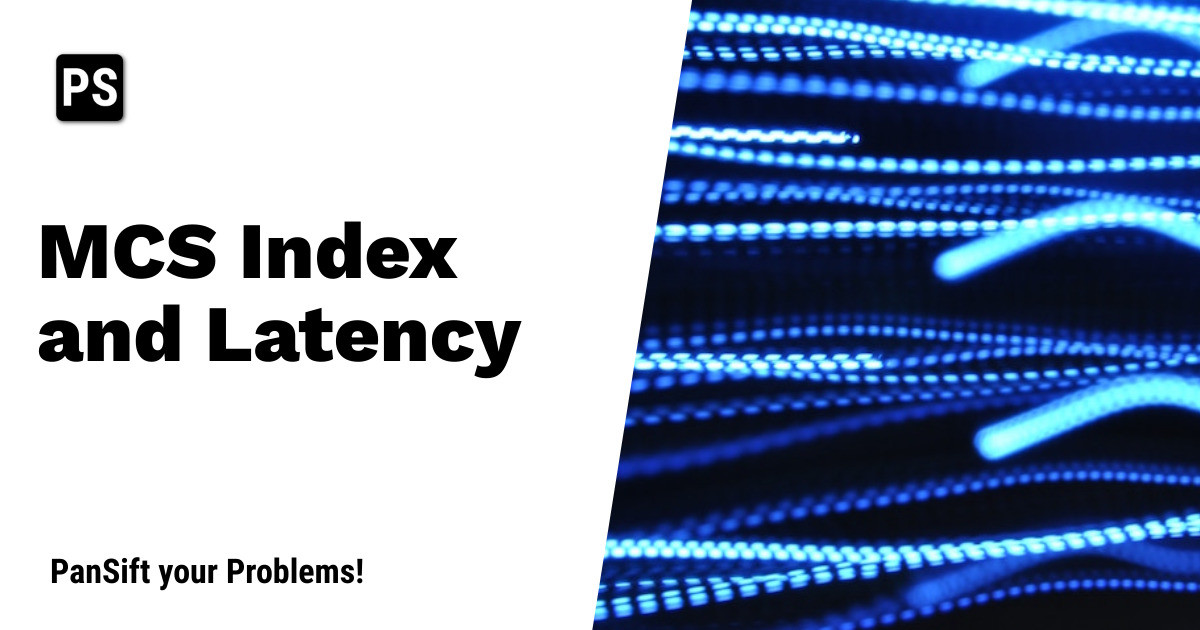 TL;DR: From hundreds of thousands of data points, MCS (Modulation Coding Scheme) would seem not to correlate with latency.

The question of latency and Wi-Fi intrigues me (especially for MCS indices of 4 and below). You may jump to conclusions and holler “it depends”, but does it?

My gut told me latency depends on a little more than just MCS. Clients use MCS to dynamically step up or down encoding schemes to stay resilient in the face of changing conditions. I envisaged lower MCS would constrain throughput, aggrevate congestion, and thus increase latency. But does “bad Wi-Fi” result from the lowest MCS rates or do other elements contribute? What is “bad Wi-Fi” really, and just how resilient is it at lower MCS rates across 2.4GHz or 5GHz frequency ranges?

I set out to answer some of these questions using data from our new Wi-Fi assurance and remote troubleshooting tool (live demo). I decided to look at over 20 million sample data points across 20 randomly selected agents (using our maximum retention period of 30 days). Not all agents were online all of the time (or actively transmitting), yet PanSift agents perform network checks and measurements every 30 seconds for high fidelity data capture and analysis. PanSift grabs so much data I began by targeting MCS and latency, and how they may or may not be correlated. Additionally, I then looked at the impact of 2.4GHz / 5GHz and IPv4 versus IPv6 for additional context.

With queries to our Influx backend (a Time Series Database), I only chose data points from agents that were “locally_connected” (i.e. the default gateway was responding), “wlan_connected” (WiFi connected of course!), “dualstack” (IPv6 and IPv4) and “ipv4_only” or “ipv6_only”… while ensuring that the en0 interface was being used as the active default gateway (by checking the route table). The data spanned macOS versions 10.11.x, 10.14.x, 10.15.x, 11.6.x, and 12.x with physical models ranging from iMAC to Mini but mostly Macbook Airs and MacBook Pros.

By using Influx’s covariance functon with the Pearson R value, I could check the correlation between MCS index and latency values. Positive scores between 0 and 1 mean a correlation resulting in both values increasing together (a stronger correlation is closer to 1) and then negative numbers from below 0 to -1 would mean that as one value increases, the other decreases.

I was hoping for a strong negative correlation (-0.5 to -1) that would prove a higher MCS index helped to reduce latency… or to put it another way, that a lower MCS index would lead to increased latency… but this doesn’t seem to be the case below according to Tables 1-3:

Note: The data is inconclusive and shows only a minor difference relating to positive and negative values (which may give pause to wonder). More agents and data points are required!

Low MCS does not seem to equate to higher latency… so “bad Wi-Fi” must relate to airtime, SNR, CCC / CCI (Co-Channel Contention / Interference) ? What should we delve in to next, leave a comment below!?

Work From Anywhere requires reliable connectivity for all voice, video, and data. Inevitable issues cause individuals and teams to lose time and productivity while missing out on opportunities. Whether at home, in a coworking space, or in the office (and irrespective of network owner), forward thinking teams embrace smarter tools to save time and money. See how PanSift provides instant troubleshooting irrespective of location.

End user experience monitoring for your team or tribe!